There’s more to Elena than meets the eye. On the face of it, she is a modest, middle-aged woman who runs an unassuming grocery store in an Andalucían white village (she lives and works opposite Ana Luna).

Elena is always there, behind the counter, with her apron on and hair tied back. She knows everyone, and everyone knows her. Neighbours gather and catch up on each other’s news while they wait their turn to be served. There’s not much room though, so it’s a cosy, elbow-nudging affair.

Elena takes her work seriously, taking care to give her customers exactly what they want. You can see it in the way she looks people in the eye and listens (properly).

But there are also fun flashes of Elena’s deep-seated love of life.

One day, she stops still when she hears some music out on the street. With a gasp, she drops her pen, removes her glasses, then dances her way outside with a clap of her hands and a joyful Olé as she goes.

Customers follow her out, and together we salute a marching band’s loud approach.

Elena flourishes flamenco hands as she jigs a baby on her hip, and laughs as she spies my camera – she is in the moment.

Slowly the band’s music is swallowed up by the usual street sounds as the musicians beat it out of sight. We troop back into Elena’s shop, each of us assuming our previous places in the queue (but with much more joie de vivre to our chat).

Elena, back behind her counter, smooths her apron with a contented sigh, and returns to business. It’s Fería time, Elena explains to my son and me, almost as an afterthought.

We visit Elena’s grocery shop often during our time here, even when we need nothing, because (a) Elena’s lovely, (b) her mental arithmetic is a marvel – my son notes that Elena has neither a till, nor any barcodes on her goods, and (c) something is always happening.

Like a heap of unidentifiable foodstuff piled up on the scales for María, our neighbour. 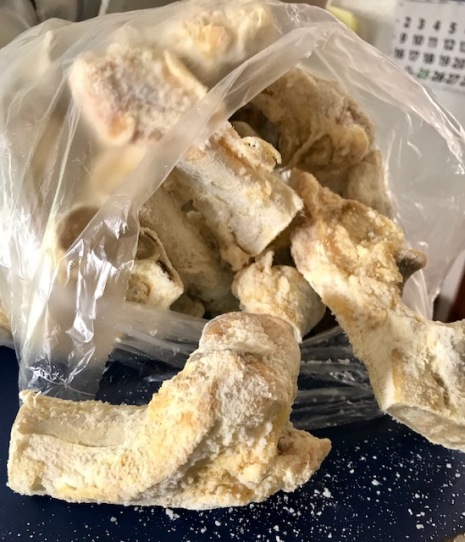 It’s not something you would normally buy at Tesco. Or even Waitrose.

Es ‘Hueso de Cerdo Salado’, I’m told. And they all join in: Elena, María, and a couple of others. It’s an essential ingredient in flavouring soup and other dishes – it adds a delicious salty something, and is found all over Andalucía because it dries so well in the mountain air.

I’m not sure I’ve caught the name correctly, so I say “¿Escriberlo por favor?” (please could you write that down?).

Elena forgets her columns of maths, and the line of customers, and instead turns a new page in her notebook to write down a soup recipe enriched by what María’s trying to buy (that’s still weighing on the scales).

I feel bad. I only wanted her to give me the name of salted pork bone in Spanish.

Not that María minds (that’s her on the left).

The finishing touch: Elena asks another customer to reach a particular packet of pasta to show me. These small pieces of pasta (she points) can be added to the soup at the end, or try jamón, chorizo or eggs.

No one complains at this interruption of a cookery lesson – it’s important. Nor will Elena rush her scribing; she is neat, methodical and wants to do it properly.

One day my youngest son tries to ask questions about the bread that Elena sells, but can’t make himself understood, and I am of no use either. Elena tries hard to grasp his meaning but knows that actions speak louder than words.

She leads us – in turns, leaving the other in charge of the shop (really?) – behind her counter, through her kitchen where a tortilla sits cooking on a stove, and down some stairs to the artisan bakery below. 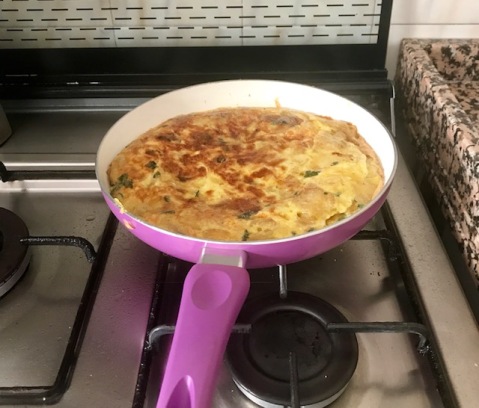 Elena says that her husband and brother run the panadería – working each day from the early dark hours. 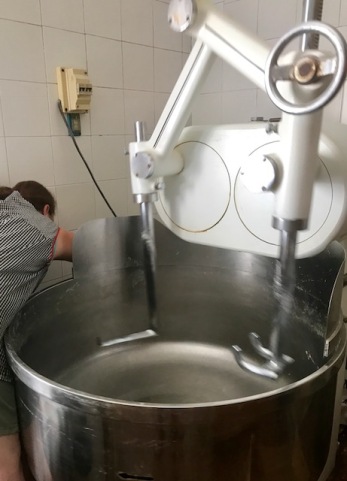 On our way back up to the shop, the tempting tortilla in the pretty pink pan looks about done, and I ask Elena if it’s her lunch. Sí, would we like some? Er .. my Spanish is too bad and I am too slow to say: no – we can’t take your lunch!

Elena turns the tortilla onto a plate, and cuts a generous slice, wrapping it for us to take away. Later we share it by the piscina municipal. The potatoes are thinly sliced and layered and the seasoning is just right. 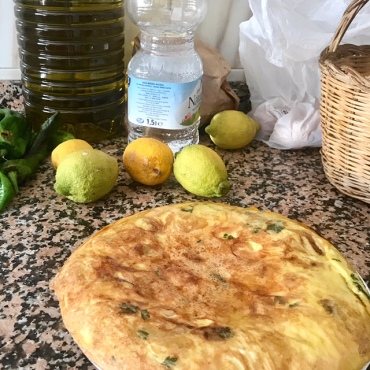 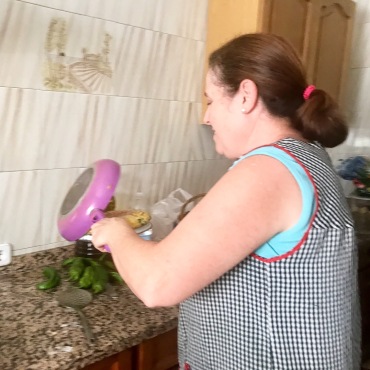 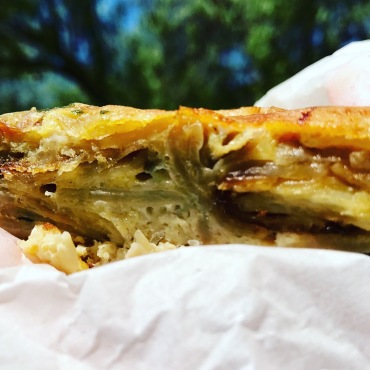 Elena disagrees when I stop by to thank her. She shakes her head – the potatoes were too old, too tough, not good enough. Elena is a perfectionist.

I ask for the recipe anyway, and Elena starts writing in my notebook. She breaks off to grab a handful of herbs from her kitchen for me to see and smell. Parsley and a variety of mint. She says a lot of things which I don’t understand, in a knowledgeable and passionate way. 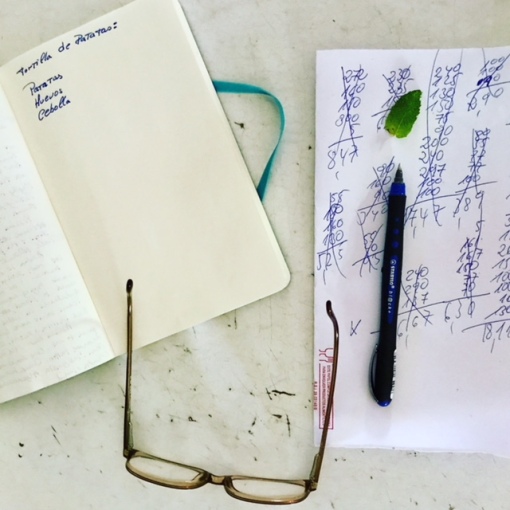 The time comes for us to leave friendly Algodonales for the grandeur of Granada, and we pop by Elena’s to say goodbye. Her eyes bear a wistful look as we tell her where we are going.

“Granada es muy preciosa” she says reverentially, and presses her palms together as if in prayer. She describes the magic of the Alhambra with her words, eyes and hands. She speaks of the music that courses through the city, and I wonder if she’s been transported there in her mind. But Elena is practical too: she advises that the best time to visit Granada is in Springtime when it’s not so burning hot (not very helpful now that it’s August).

We are home now, and I miss Elena; she is a gem. She gave us dancing, her lunch, recipes in beautiful writing, and an insight into how an intelligent, open-minded woman, who has a keen appreciation of the finer things, lives her life in a small village in Spain.

Every town should have an Elena. Every town probably does. 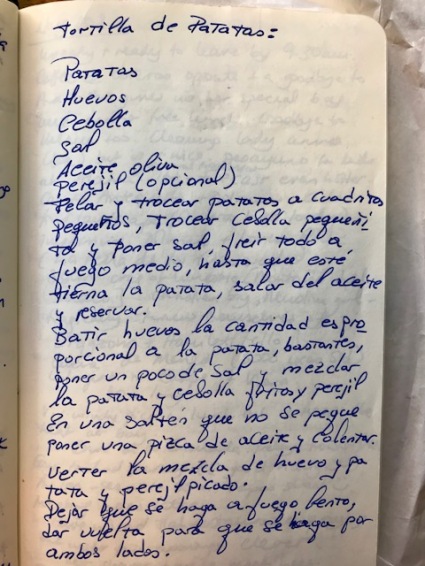 One thought on “Elena the grocer, baker and tortilla maker.”