I travel through the eyes of another, with glimpses of Gdańsk like these:

They are my reward for arming my husband with this before he left for Poland:

Thank you in Polish: Dziękuję’ (jen-koo-yea)

Snapshots are shared sporadically without much of a commentary (my husband is work-focused), so I try to discover more for myself. 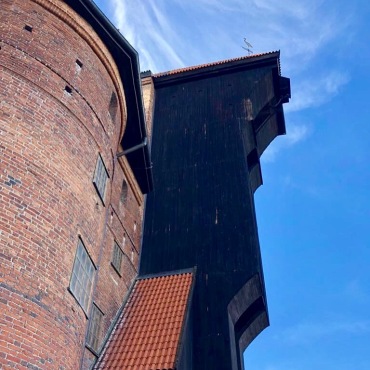 Once a working port crane, the Żuraw (crane) had a huge lifting capacity powered by four men walking its treadmills. It’s a visually unmissable reminder of the Gdańsk’s historic importance as a trading centre. It also served as the city gates. Largely destroyed during the Second World War it now stands restored on the waterfront, and is part of the Polish Maritime Museum.

Neptune sprays the Long Market (Długi Targ). Flemish artist Piotr Husen’s 1615 statue was partly destroyed during WW2, so was taken apart and kept in different places. It was returned in 1954 and restored this century. Legends are attached (of course): it once flowed with Goldwasser – potent Gdańsk liqueur, and every 1000 years it will spill out the vodka. Try to be there when it does.

But it’s the new Museum of the Second World War which elicits more images and words than anything else.

Powerful and moving, with personal stories documenting everything from the small details of how to source wedding dress fabric to the overwhelming horror of war and a sister’s hopeless grief, the visit clearly affects my husband, and some of the pictures he sends bring tears to my eyes.

The museum is built in three parts: the basement represents the past, the square on which the building sits represents the present, and the slanting glass tower stands for the future. Cleverly, a small amount of natural light illuminates the past in the basement – there must always be hope. 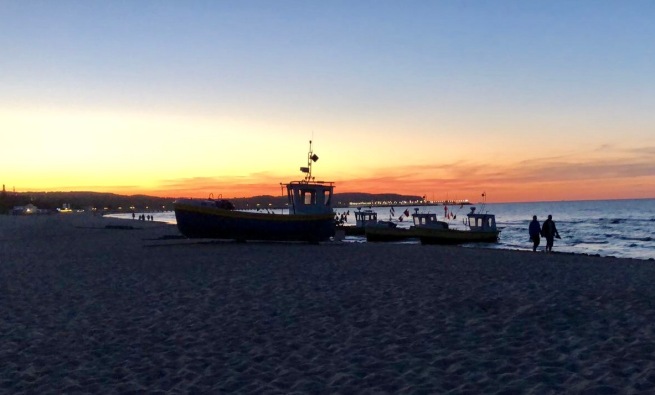 My husband is now home and talking of another work jaunt – this time to Budapest.

I’ve told him he can hold tight for now. His photos are great, and give me an intriguing glimpse into a place I might otherwise know no more about than is on a crib sheet.

But it’s my turn next.

More on the Museum of the Second World War here and its design here.

Ryanair and Wizz Air both fly to Gdańsk from the UK.

One thought on “Glimpses of Gdańsk”

Follow Have Paprika, Will Travel on WordPress.com
Join 737 other followers