Towards the end of our mezze lunch, my son stands up, rounds his tummy with his hands, and declares with a smile that he’s full to the brim with “Syrian Magic”.

I’m hardly surprised. He’s slathered countless lamb flatbreads with great dollops of hummus, tried big mouthfuls of everything else, asked the chef for more, and then finished with the squidgiest chocolate brownie I’ve ever seen. 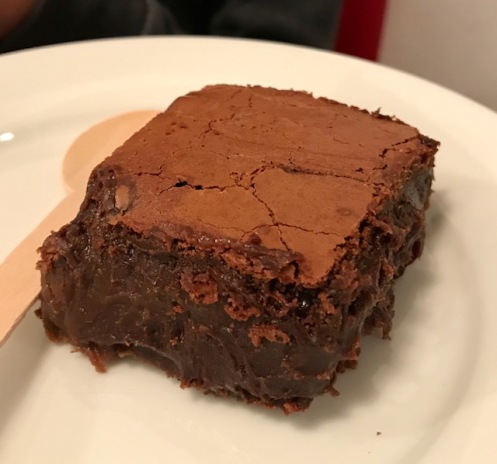 I heard about the Syrian Magic from a talented writing/journalistic duo I know who have volunteered some of their time and shared their good food at the #CookForSYRIA Pop-Up café near Covent Garden. 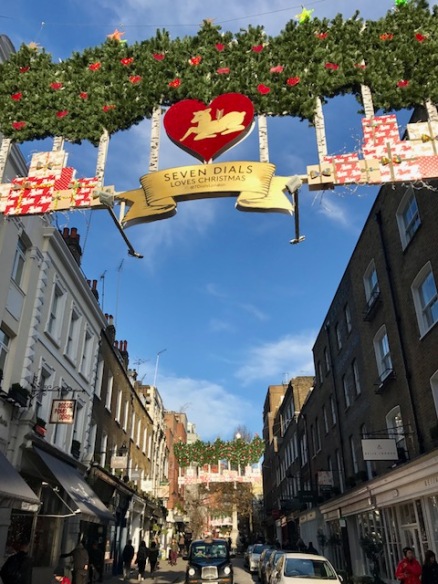 A team of like-minded people is behind the #CookForSYRIA (now global) movement, and – as they say – “everybody is invited to the table“. Their mission is to spread awareness of how the war in Syria has affected the country’s children, and to raise much-needed funds to help them, channeled through Unicef UK.

Also in the mix is #CookForSYRIA’s determination that – amidst the ongoing devastation – Syria’s rich culture should continue to be celebrated.

Which chef Imad Alarnab most definitely does here (until 3pm on Christmas Eve), at 36 Monmouth Street in Seven Dials London.

Imad tells us that the lamb flatbreads are very tasty too. My son keeps looking at the hummus, so Imad dishes out huge spoonfuls and explains that it contains only five ingredients: chickpeas, tahini, lemon juice, cumin and salt. No tinned chickpeas though – only the freshest will do. A volunteer vouches for its goodness, saying it’s the best hummus he’s ever tasted.

But I have a question (fed by by an obsession), and now I have a key person to ask, “Is it true that every Syrian home has a big kitchen jar of za’atar always ready to hand?”

Imad shakes his head with an air of finality, “No.”

Oh. My research has let me down.

Imad says emphatically, “Not one.”

Then he smiles, “Not just one – more than one! Because the youngest child may like the red (Aleppo) za’atar, and the oldest may prefer the green (Palestinian) za’atar. And then another child else may want the Damascene za’atar, which is somewhere in between.”

I say that I have some special Aleppo za’atar all the way from Beirut, but that I can actually buy green za’atar at my local supermarket. I love it. Imad is not impressed, and starts pouring generous scoops of his own supply into an empty coffee cup. He covers it with a lid and hands it to me. “Try this.” he says. 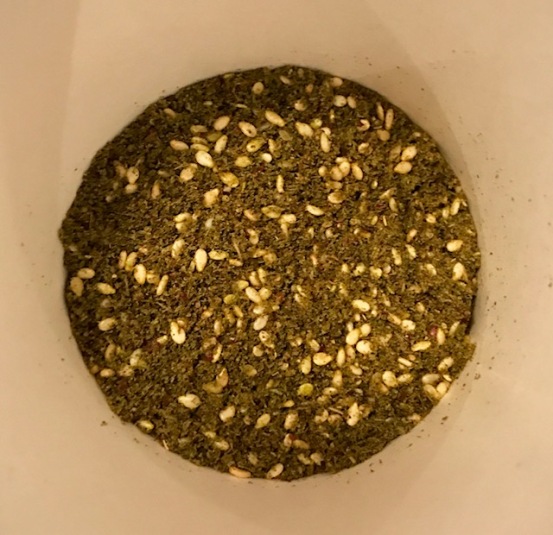 Thanking him (he refuses payment), my son and I take our bowls of mezze, bejewelled with pomegranate seeds, and feast on some Syrian magic until we are more than full (of course, we then follow it with that very gooey brownie, because there’s always room for chocolate).

For the best hummus ever, (and an impromptu za’atar lesson), you’d do well to visit the #CookForSYRIA Pop-Up Café – but be quick. It’s open today from 10am until 7pm, tomorrow and Saturday from 10am until 8pm, and on Christmas Eve from 12pm until 3pm.

Apart from Imad’s mezze, there are cakes and other lovely bites to eat (all donated), and you can also buy a copy of the #CookForSYRIA cookbook.

But if you can’t make it now, it’s never too late to get involved. We can all be – #CookForSYRIA is not done yet.

P.S. Just a day later, my cup of za’atar is draining fast. Imad’s mix is fragrant, zesty, and addictive … and I have a pack of questions yet to ask.

Follow Have Paprika, Will Travel on WordPress.com
Join 737 other followers