Photos: all photos (unless obviously mine) are published with kind permission of the Anne Frank Museum. Copyright belongs to the Museum, and the photographer is Cris Toala Olivares.

Pretty Prinsengracht – I recognise the tall canal houses from 26 years ago. I also remember staring up at the Anne Frank Huis, unable to go inside. Penniless at the end of a European train extravaganza, my travelling companions are I couldn’t afford the entrance fee.

We stood outside the tall building, searching upwards at the dark windows for clues.

Where did Anne sleep, eat and live with her family and 6 others?
In which room did she write her famous diary?
Where did Anne sit and witness the changes in her horse chestnut tree as its bare branches became leafed in green, then blossomed in white, welcoming early summer? (13 May 1944)

Later we sat on our weary back packs at Amsterdam Central Station, having pooled our last coins, and split a single Mars bar into three bite-sized pieces to share – our evening meal before taking the night train to our final destination.

Here I am again, in 2016, with my children. We’ve come from a morning tasting our way through the fun and colourful Albert Cuyp Markt – feasting our eyes on Middle Eastern falafel, and sandwiches stuffed with houmous and garlicky olives, before sweetening up with Dutch poffertjes and chocolates.

Leaving the multicultural buzz behind, we talk about how different Anne Frank’s war-time Amsterdam must have been. Then Westerkerk’s tall tower comes into view, and we know we are nearly there (74 years earlier, Anne could peek at the church through a hole in the attic, and found great comfort in the regular ringing of its church bells – 11 July 1942).

Before we go inside: some background

Otto Frank led his family to the Netherlands from their native Germany in 1933, when Hitler came to power. He established a business (Opekta – specialising in selling spices and pectin for the production of jam) at Prinsengracht 263.

Anne details the implementation of anti-Jewish measures after the German occupation of the Netherlands in May 1940: first comes the compulsory wearing of a yellow star, then bikes are taken away, and the ability to use other modes of transport forbidden. Jews are permitted to shop only between 3pm and 5pm, and a curfew is imposed between 8pm and 6am. No Jew is allowed to attend any cinema or theatre, or public swimming pool or tennis court (20 June 1942).

The list goes on. Eventually it became increasingly clear to the Franks that the only option was to appear to escape, so the family abandoned their home at Merwedeplein 37, South Amsterdam, and went into hiding within Otto’s office building, leaving a trail pointing to a departure to Switzerland. The Van Pels family joined them soon after, and later an acquaintance called Fritz Pfeffer moved in too.

My children know the story behind the Franks’ self-imposed incarceration, as we’ve been reading Anne’s diary together. Lovely portraits of her greet us as we walk into the museum.

A film is running in the first room. We see the unfolding fate of countless Jews as the Nazis go about their grim work of loading frightened people onto cattle trucks that will take them to concentration camps. Families are ripped apart. Careless, spontaneous killings take place. Then the gas chambers. The narrator’s calm voice continues as we see skeletal bodies piled up in heaps.

My youngest children draw close, and my oldest two boys stand very still. My daughter looks at me with concern, and asks if I’m okay. I wipe away tears that have tumbled down my cheeks, and nod. I can’t say a word.

I didn’t expect to react like this. I’ve been to Auschwitz and seen numerous war movies and documentaries, I studied Nazism at school and university. But I am not immune. I feel my youngest child’s small hand gently stroking my back.

My children lead me through the ground floor warehouse. Informing us are Anne’s fluent words written on the walls: she and her fellow occupants of the Secret Annexe had to stay as still as possible during work hours as the warehouse staff knew nothing of their presence. We hear the steady rhythm of our own shoes up the steep canal house stairs to the old offices, and try to imagine having to keep constantly quiet with the ever-present fear of discovery hovering (11 July 1942).

In the offices, photos, short films and a model of the Annexe further illustrate the story. We listen to Otto Frank (who died in 1980) speak about his safe return from Auschwitz, only to discover the devastating news that his wife and daughters had all perished.

We learn too about the good and brave people who helped support Otto’s risky plan. Miep Gies explains that to her it was crystal clear that she must act – how could she not?

We find the swinging bookcase which disguised the door to the Secret Annexe, just as it’s described in Anne’s diary. 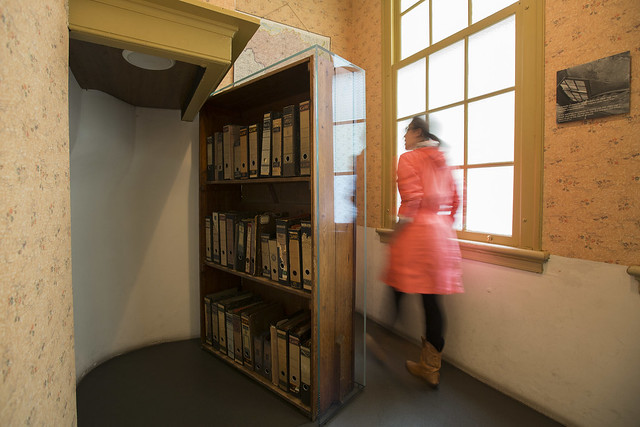 Then here we are in Anne’s bedroom, where my daughter clutches me, and points at the walls with a smile. Photos of glamorous film stars gleam alongside other pictures, creating an altogether cheerful ambience. The space is tiny, but contains a sense of positivity that has survived the years. (Anne’s diary entry of 11 July 1942 describes how she decorated her room). 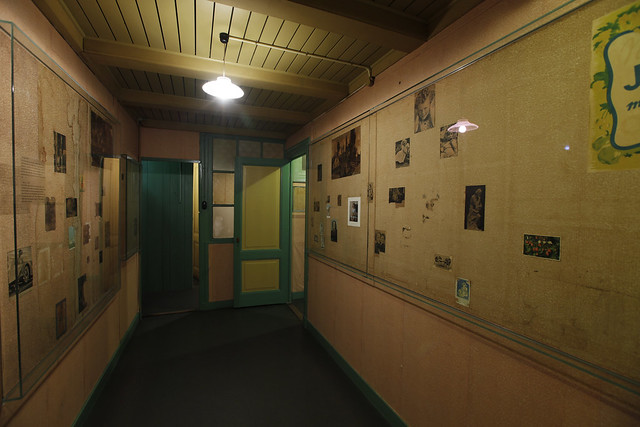 Neither Anne’s room (which she first shared with Margot, her sister, and then later with Fritz Pfeffer) nor any other room in the Annexe is furnished. Otto Frank took the decision to leave the Annexe as empty as it was made by the Nazis who discovered them on 4 August 1944.

The Van Pels’ room (above the Franks’ bedrooms) also acted as the communal kitchen and living room. This is where the eight inhabitants’ cooped up lives played out – with birthday celebrations, games, studying, disagreements, illnesses, mealtimes, hunger and boredom.

Anne’s diary brings this all to life with wonderfully acute observations of ordinary people living an extraordinary existence. Her difficult relationship with her mother is one many teenagers can identify with (mine included, I suspect), but the intense circumstances of their prison-like existence magnified it (2 April 1943), and Anne acknowledges the cathartic nature of writing (16 March 1944).

As we move onwards from the Secret Annexe, we learn how Prinsengracht 263 was raided on 4 August 1944 (Anne’s last diary entry was 1 August 1944). All eight occupants of the Annexe were sent to concentration camps. Otto Frank was the only one to survive. No one has ever determined who betrayed the Franks and their friends to the Gestapo.

Somehow, Miep Gies managed to save Anne’s diary and other notebooks. When Otto returned to Amsterdam in June 1945, Miep handed him Anne’s written words, and in June 1947 he succeeded in having them published. 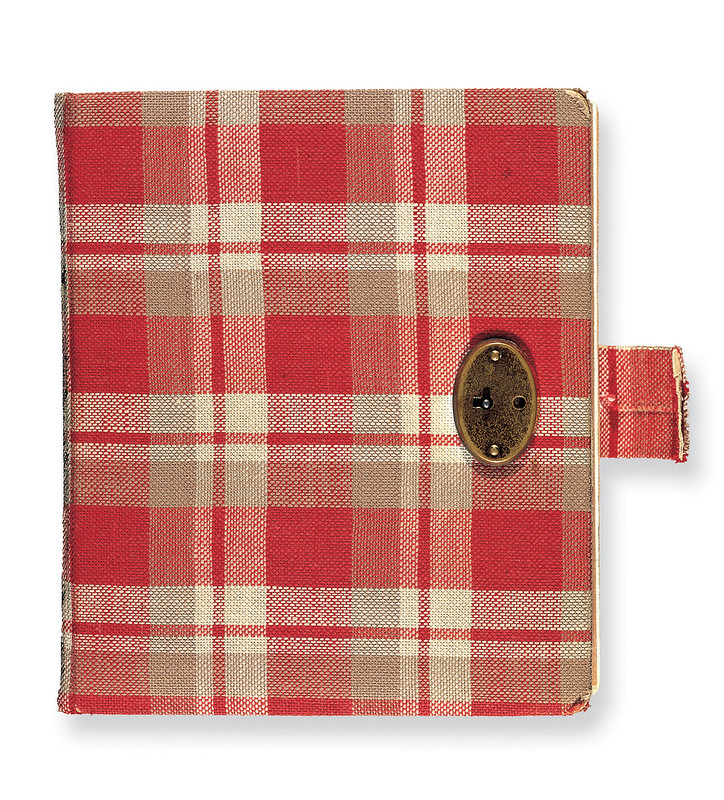 We watch a heartbreaking account told by Anne’s childhood friend, Hanneli Goslar, about their brief (and dangerous) reunion at Bergen-Belsen. Hanneli was a more privileged prisoner, as her family held Palestinian passports, so the two friends were separated by a fence. Communication between prisoners on different sides of the fence was forbidden (punishable by death), but Hanneli could see the starving state her friend was in, and tried to throw her a package of food. By this time, Anne had lost all hope.

The Exhibition Space draws us back to the normality of the Frank’s life pre-war. Photos depict a happy family at home in Merwedeplein 37-II. The address is less well known and not open to the public. Today it looks exactly as it did when the Frank family lived there, and is used as a safe haven for foreign writers who are unable to work freely in their home lands.

Anne can be seen watching a wedding party from the window of the second floor flat in this brief film clip from July 1941.

Before we go, a short film mesmerises us. Visitors to the museum, students, actors, writers, and friends speak about what Anne Frank’s story means to them. Nelson Mandela reveals how it inspired and gave him courage when he was imprisoned in Robben Island.

We choose to leave our own impressions in the Guest Book. All of us are affected by our visit, each in our own way, so we take turns to record our personal thoughts.

One of my children writes, “People should read Anne’s diary so that mankind doesn’t make the same mistakes.”

And another, “I wonder what Anne would have become if she had survived the war.”

Anne died just a month before the liberation of Bergen-Belsen (not long after seeing Hanneli Goslar), probably of typhus. So we will never know what else Anne might have achieved.

But her heart-felt desire was to become a well-known professional writer, and although she was denied the chance to fulfil her ambition herself, since 1947 her diary has been read by children and adults all over the world (in over 70 different languages).

We talk about Anne Frank once we’ve left the Museum – it’s hard not to. We agree that she seems to have been no saint (what child is?), but that she was sparky, fun and remained incredibly positive during her time in the Secret Annexe.

As no. 3 says, “She never stopped dreaming.”

Anne wrote short stories and kept quotes from other writings too. But it is her red-checked diary that she received as a gift for her 13th birthday, with each entry addressed to “Dear Kitty“, that keeps informing us today. With its humorous and sometimes painfully personal stories of the hardships of confinement, and intelligent and insightful reports of a world torn apart by war, it’s a must-read. And a must re-read.