Relentless raindrops darken the blue of my denim jacket as a merry string of gazebos tries its best to shelter damp groupings of plucky people: here we will huddle until the storm is over.

Raw flashes of lightning threaten to rip the gazebo seams apart.  Then dramatically charged crashes of thunder seek to shake our resolve.

Delighted shrieks as a straggle of boys darts out from under cover to kick a football in the mud, and dance with joy at a wet hat trick (better luck than the England team).

Clearly it’s time for a dripping trayful of mid-summer Pimms, rushed across the Village Green by a friendly face, who indicates an offer of soggy hot dogs tucked into crook of his arm.

“I can’t stand the rain.” belts out the music system.

This is an English Summer Fête in its full glory. 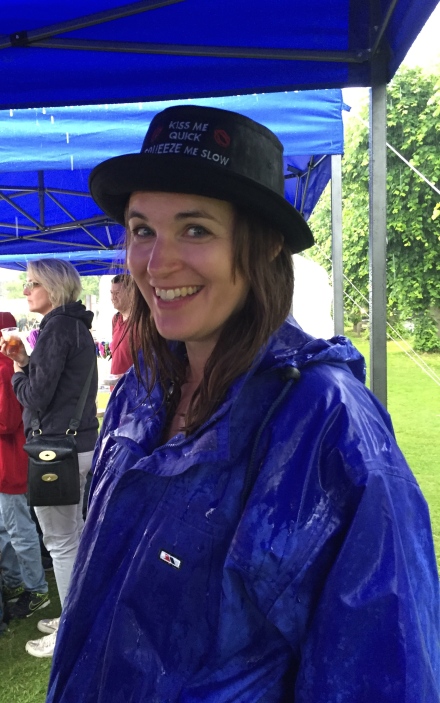 (Roughly) half of these intrepid people have just voted for the UK to remain in the European Union. (Roughly) half of them crossed the other box. We are all still talking and laughing. Some choosing to avoid the obvious topic of conversation, others not.

Perhaps a few internal screams of “How could you vote LEAVE?!” are silently vocal behind smiling facades of steel, and the Tug of War is fiercely fought – is it fuelled by good fun community spirit or do I imagine a grim undertone fed by the uncomfortable truth that each team knows that about half of its own side is probably divided?

That fact is definitely on my mind as I watch the teams struggle, and I confess to a more emotional response to – and somewhat less than noble thoughts surrounding – Brexit than I had expected, or am proud to admit.

Who knows, really? Bold pronouncements bounce around the airwaves and social media with a frequency and force to rival Wimbledon’s tennis balls. Some are impacting painfully, keenly calculated to make a direct hit. Others are swiped away with a confident and satisfying smash.

The complexities that the simple question (LEAVE or REMAIN) posed threw up many more questions than could be answered with a quick cross in a box. And hardly any of us (experts included) can ever hope to fully understand them all.

The confusing cacophony of opinions grows louder, and the inevitable suspicion (on both sides) is unsettling. Emotions are sky high, and are slicing through the soul of our land.

I know that when I receive my new passport in 2017 (for my current passport expires then), I will be sad not to see the words European Union gracing its cover. However, I hope that someone will remind me that once, in 2012, I met Alex in Malawi, for whom any passport – with its keys to the doors of travel and opportunity – would have been a wonderful thing.

I also know – for I was bored of Brexit yesterday – that the Hazara people (descendants of Ghengis Khan) continue to fear persecution by the Taleban in Afghanistan, and that many have fled their homeland as refugees. Possibly some are heading here.

And that Spain has just reached its second inconclusive general election result in six months. Her people face their own political problems, not far from our own shores.

A muddily intricate patchwork of local, national and world events consumes and affects us all, in one way or another.

All I am really sure of is that we must work hard to salvage a sense of community – locally, nationally, on a European level, and globally. And remember that it’s not just Brexit that can cause the earth to wobble.

So when No. 4 looks at me with his deeply serious brown eyes, and asks me quietly if he will still be able to live in Portugal when he grows up (like me, he can’t stand the rain), I feel I can only reply with an assured “Yes“.

I trust that he will learn that it is up to him and to us all, and that it’s not a one-way street. Plus he can always change his mind, for there is a great big world out there. But until that time, there’s always next year’s wonderful English Summer Fête to look forward to (whether or not the rain falls).

2 thoughts on “Pimms, a Tug of War, and Brexit”